Antique collectors and nostalgia buffs go gaga over (and pay big bucks for) original Fiesta ware or Bauer plates, coffee cups, and flower pots, which are now seen as emblematic of California in a previous era, between the world wars. Not only are these products a legacy of a bygone period of history but they're colorful and functional, too.

What may be more noteworthy to those of us in the Northside is that, more than a century ago, in 1902, our neighborhood witnessed the birth of what would eventually become a worthy competitor for these products, the Garden City Pottery Company.

"Manufacturing facilities and offices were located at 560 North Sixth Street, near downtown San Jose" within the boundaries of the current Northside neighborhood, according Jim Pasquali in his book, Sanford's Guide to Garden City Pottery: A Hidden Treasure of Northern California (Adelmore Press 1999) (the Guide). Maraido Village apartments now occupy the site of the former pottery.

According to Pasquali's Guide, "during those early years, the company produced stoneware crockery, sewer pipe and red earthenware flowerpots." The flowerpots, it happens, were made from a formula using fifty percent local clay from Coyote Creek, mixed with sand and clay from other sources. Garden City Pottery, by the end of the 1920s the largest pottery in Northern California, sold the pots to wholesale growers using sales yards not only in San Jose, but also in San Francisco and Oakland. 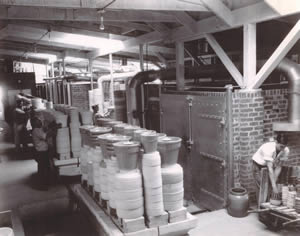 The Great Depression of the 1930s, however, imperiled Garden City Pottery and forced it to re-invent itself to survive. Controlling shareholder (and former city councilman) Luther Rossi, emulated "the new-found success of the Southern California potteries with their brightly colored wares," says Pasquali. Rossi "had soon hired a designer to revitalize the company's product lines and a ceramic engineer to develop a palette of colored glazes." Rossi hired Royal Arden ("Hick") Hickman, who designed dinnerware and decorative vases for the company.

The new products "were hugely successful," according to Pasquali. Garden City Pottery "was sold throughout the western states and Hawaii, and eastward to Chicago and New York where their largest customer was Macy's Department Stores; pottery was shipped to New York by the boxcar load."

Garden City Pottery also sold "huge quantities of mixing bowls" to Montgomery Ward and had large contracts with the U.S. Army for crocks and with Alhambra Water Co. for clay water coolers.

In May 1944, a huge fire ravaged the company's offices and part of its manufacturing facility. But the plant was quickly rebuilt with new equipment.

Following World War II, Garden City Pottery faced new economic pressures and diminishing profits from its dinnerware lines due to rising labor costs. The company again re-invented itself, returning to "its core business, garden products," says Pasquali's Guide. "The Garden City Pottery Company was able to grow and remain profitable at a time when many of California's other potteries were failing." By the 1960s, "Garden City Pottery became the largest supplier of garden pots in California."

However, the 1970s were unkind to the company. Competition from cheaper clay products from Korea and Italy, and from plastic flowerpots, led the company to cease production in 1979. Garden City Pottery continued to be a wholesale distributor of pots made by other companies for a few years before finally shuttering operations altogether in 1987. "In the summer of 1997," says Pasquali, "the buildings were razed and the property was cleared to make way for a redevelopment project," Maraido Village apartments.

You can still find examples of Garden City's pottery in local antique stores. I own a pair of pickling crocks, one a ten-gallon size and the other four gallons, each with the trademark Garden City Pottery logo. They serve as fine decorative flowerpots on my back deck -- a little bit of tangible Northside history. 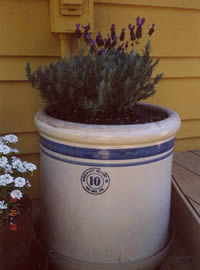 This NNA web page sponsored by eNative, "Know YOUR neighborhood!"