At the beginning of the 20th century, on the very northern edge of the Northside, stretching from N. 13th Street past N. 17th Street was Luna Park, an amusement park developed at a cost of $50,000 by trolley car magnate Lewis E. Hanchett to provide an entertaining destination for his trolley cars. Luna Park "once was home to a merry-go-round, a roller coaster, rodeo grounds and - most important - a baseball diamond for the fledgling San Jose Prune Pickers" minor league team which debuted in 1907, the San Jose Mercury News reported in December 1999. The major league Chicago White Sox also held played spring training games there against Santa Clara College. 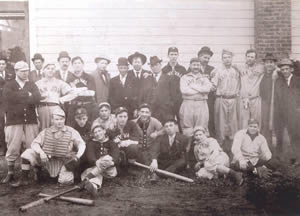 The late Florence Menteer, a long-time NNA board member who lived her entire life in the neighborhood reminisced about Luna Park in the Summer 1995 Northside newsletter:

"Growing up in the Northside . . . I remember riding the streetcar with my mother. We boarded on 17th Street at Empire and took the Luna Park line back home. It traveled down 17th Street to the very end. I am not quite sure when that name changed, but it hasn't been that long.
"I remember asking my mother about Luna Park and she told me it had been a big amusement park in the area. As recent arrivals from Italy in 1912, her brothers took my dad and her to the park and took her on a 'hair-raising' ride on a roller coaster. She was never to return! My hundred year old aunt told me about a big dance hall and how people came from all over for a day of fun."

"Luna Park did not enjoy a very long run," according to the Mercury News. "It limped along until 1920, when an axle company bought 12 acres. Soon, most of the land was subdivided into industrial tracts."

This NNA web page sponsored by eNative, "Know YOUR neighborhood!"